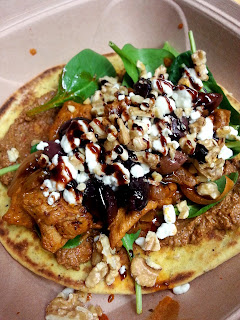 *Update* - I actually now recommend buying 100% pomegranate juice and simmering it until it's concentrated, instead of buying the commercial kind. (Unless you can find a commercial brand that's just 100% pomegranate juice.) I recently shopped around for some and found a couple popular brands that had added sugar and citric acid. I don't have a problem with either of those two, but it definitely didn't taste as good as the stuff I made from 100% juice. So yeah, the homemade stuff is a little more expensive, but if you want the highest quality pomegranate molasses, it's definitely the better choice.
Posted by How's it Taste? at 6:39 PM